Just posting three pictures of Amber Benson I recently use to make the She's So 63!young!Albus argument, pretty:

I really miss Tara. I'm still seeing red to this day that they killed off Tara so that we could see Willow go hair actually turns black kinda dark.....dude, subtly where? Willow was already dark BEFORE Tara was killed - that was why they broke up remember? Some people make the bad things happened with Angel and Buffy argument, well, I wish we had gotten that, that Tara didn't die but that they get Starcrossed instead because Willow crossed a major line with the mindwipe of the fight. From Tara's perspective, it's terrifying - how will she know if Willow did it more than once, if she'll do it again, because if she did, Tara wouldn't remember, is the free will option of leaving again present when Willow have such terrifying powers?

...and if Amber Benson couldn't have come back for the "life changing wish" idea that Joss had, why not in the comic? 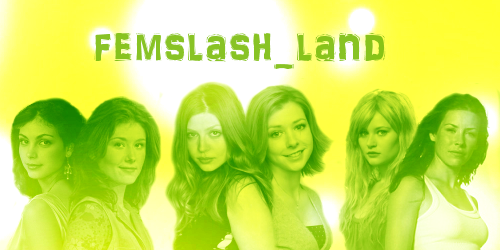 femslash_land is a challenge community where you can make graphics, write fics and participate in games about all f/f pairings from tv and movies (canon or not canon, or even crossovers). Sign-ups are here! :)

( You've got magic inside your finger tips. )

kinda_gay is hosting a Valentine's/Anti-Valentine's Day Ficathon for those of us who LOVE or HATE Valentine's day.

You can sign up for TEAM ANGST or TEAM SCHMOOP, and have the option of writing or creating for any slash or femmeslash pairing!!

The team with the most pieces at the end of February wins!!

For more information and to Sign Up, go here!!

theladymerlin are proud to present the NEW

kinda_gay! As Spike and Xander so helpfully pointed out, Boys can be "kinda gay" too, so

kinda_gay is opening its doors to ALL LGBT-themed fiction, art and discussion. We're hoping that re-vamping the community will make it a mecca to all things (fem)slashy, and have several prompty-type things to get your muses flowing: Our Fortnightly Prompt Challenge, 2012 Prompt Table, and The Current Plot Bunny.

Please feel free to come check us out (and pimp us all over)! You can find the new rules in the profile, and our mirror/sister DW community can be found here:

Come join us, and we can all be "kinda gay" together! \o/

HERE at my lj.
Collapse